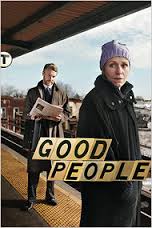 Summary: Margie Walsh, a lifelong resident of Southie, a blue collar Boston neighborhood, is fired for tardiness from her job as a cashier. A single mother, and knowing that she and her handicapped adult daughter Joyce, supposedly born premature before Margie's husband left her, "are only a single paycheck away from desperate straits", Margie goes to her old High School boyfriend Mike - now a doctor, but formerly from her neighborhood - looking for employment. After reconnecting, a discussion begins, in which Mike tells Margie that her current financial problems are her own fault for not trying hard enough, and Margie tries to explain to Mike that he had lucky breaks that most people from Southie didn't. She tells him that he is Joyce's father, and that she never told the truth about the paternity because she wanted Mike to be able to "get out". Mike and Kate bully Margie into saying that Joyce isn't Mike's, and she leaves, shamed. Later, Margie's landlady receives an envelope marked as having Margie's rent inside - thinking it has been sent from Mike, Margie intends to return it to him. At bingo, though, it is revealed that the envelope is from Stevie, her former boss at the dollar store - upon learning this, Margie accepts the money as an indefinite "loan" and Stevie agrees to help her find a new job.

Summary:
Sixteen-year-old Hiram hasn't been to his beloved town of Greenwood, Mississippi since he was a small child. He used to live there with his grandfather before his father uprooted him from his home to live in Arizona. But when he comes back, things aren't exactly the way Hiram remembers them to be. He crosses paths with Emmett Till, a fourteen-year-old African-American boy from Chicago. A few nights later, R.C., an old "friend" of Hiram's pays him a visit to tell him about Emmett Till whistling at a white woman in public and how he needs to be "taught a lesson." Hiram is worried for Emmett, but then, the boy goes missing and a few days later, his body is found in the river. Two of the four murderers are caught and put on trial (three men and one woman picked Emmett up the night of his murder) and Hiram has a strong suspicion that R.C. was the third male killer. During the trial, the two murderers aren't seen as guilty, but Hiram still struggles with whether to turn R.C. into the authorities or not because of his suspicion. He is determined to find out who the others are who murdered Emmett, but when he finds out exactly who it was who killed the boy, it makes him think twice about how 'beloved' Greenwood really is.